The purpose of Business Model Innovation Sprint program was to support SMEs in designing a new business model concept and test it with a customer or business partner. The program was led by Andreas Volmberg from Luleå University of Technology. Assisting partners were Kristiina Starck-Enman from IUC Norr and Liisa Koivisto from Kemin Digipolis Oy.

The Business Model Innovation Sprint program was conducted with three Swedish and three Finnish SMEs during the period October 2021 to June 2022. They were guided in exploring a value proposition for a new product or service.  Creative problem-solving, Service Design and Lean Startup methodology were at the core of the program.

The program had three phases: Design, Experimentation, and Reflection. All SMEs were encouraged to do bi-weekly reflections using a digital tool called Loopme.io.

The design phase consisted of four half day workshops and four reflective sessions in between the workshops. The goal of each workshop was to design an artifact which the teams could bring back to their organizations to get feedback on and to develop.

In the last reflective session of the design phase, the teams presented their own activity plan for what to do the following eight weeks in the experimentation phase. Since they had been through a fist design cycle, experimentation had the purpose of continuing to co-design the new value proposition with stakeholders and achieve learnings for the other parts of the business model (e.g., revenues and partners). The activity plan consisted of hypotheses to test, whom to test with and a measurable goal for the period of eight weeks. This phase included four additional reflective sessions where the teams were encouraged to reflect on their own process with the goal of developing their own way of working with business model innovation. 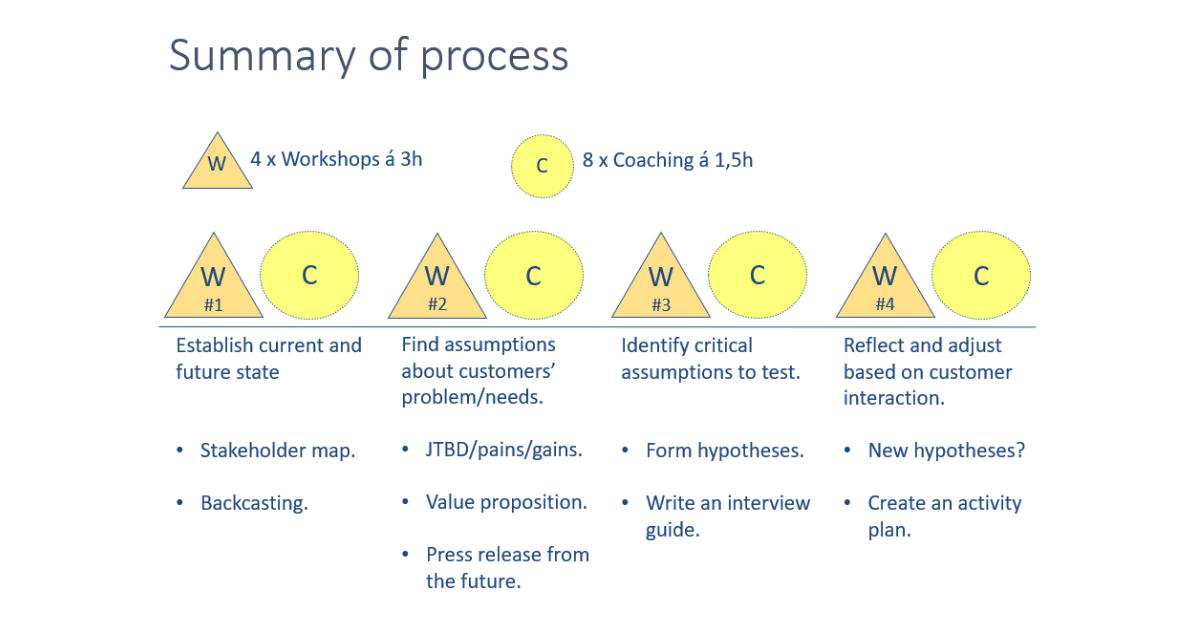 In the workshops the teams worked on their own business challenge, to find a good-enough level through time-boxed exercises and present back to the other participating SMEs, before reflecting on the workshop in the end. The in-between workshop sessions focused on getting the teams to reflect on their own process with questions such as – What did you think of the workshop? What have happened to the artifact? What is most important for you right now? Why?

The program was initiated with the Swedish SMEs where the first phase including workshops were done face-to-face in a neutral space at the university. Most of the reflective sessions in the other two phases were conducted in the SMEs own offices.

For the Finnish SMEs, the program was conducted in an online setting using Mural (i.e., a digital whiteboard solution). One observation from the online workshops in Mural is that some teams were able to facilitate themselves; reading the instruction of the exercise; setting the timer; doing the exercise; and continuing to the next one.

Workshops consisted of timeboxed exercises. Limited time for each task forced the teams to just deliver their findings and without overthinking and trying to aim for perfection. First each team member had time to think themselves in peace and generate many ideas. This method was good for those who needed time for themselves to think in quiet with no distractions. Then they gathered as a team to make collective decisions and evaluated, refined, prioritized, and clustered the findings. Some people get their best ideas when talking with someone and they benefit from the second part, when the team gathers to think together.

The underlying philosophy in the program has been derived from Pragmatism and more specifically experiential learning. The idea therefore being; those having the problem have to own the solution. It’s in this light that consulting and telling someone what they need to do, won’t be sufficient or result in any change. To create substantial results, the program has been designed around reflection, due to design in general and designing a business model, is to be regarded a reflective practice. Reflections have been built into the program on several levels, which will be described and discussed later. A key activity has been identifying and questioning own assumptions, thus aiming to improve the participants own reflexivity.

Most of the teams were struggling to find time to work according with the program between workshops. Those who did reflect on their own also showed to get more out of the program, however this could be due to other factors, too. A general conclusion is that all participants were satisfied with the outcome of the program and argued that it was well invested time for them.